Lawler Sustainability has been awarded a €1 million energy performance contract to design, install and maintain a suite of energy efficiency measures. 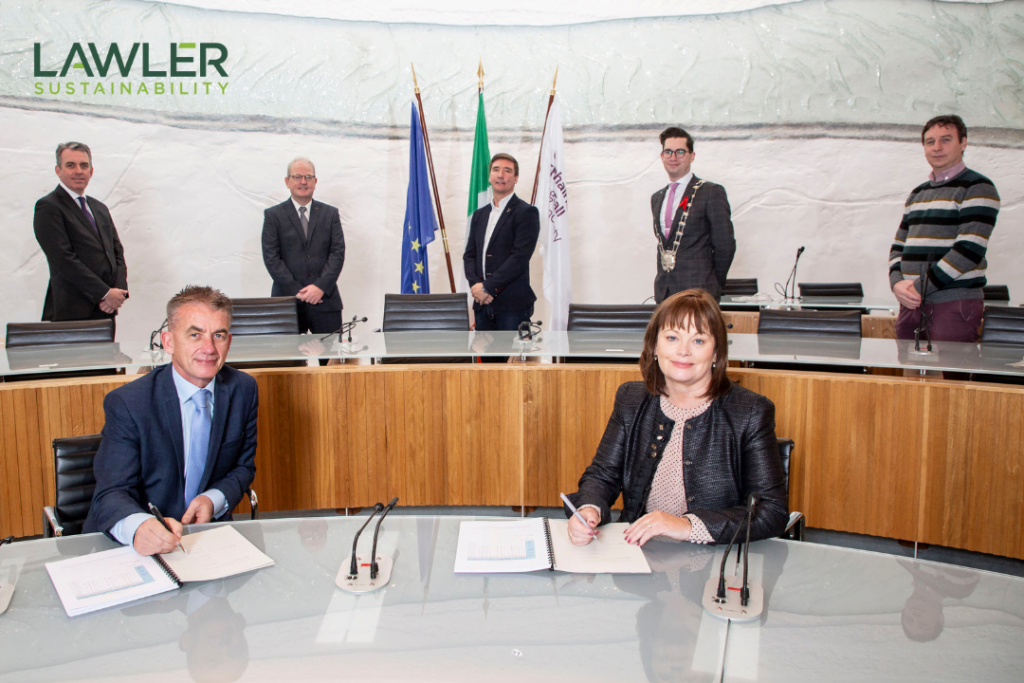 The primary measures for both buildings include the installation of a solar photovoltaic (PV) system and full upgrades of the lighting, boiler, air handling, and building management systems.

The contract, lasting for a total of nine years, will create total energy savings of 1.3GWhs per annum which represents 37% of total energy consumption at present.

Fingal has already delivered energy reductions of 39%, beating its initial target of reducing energy consumption by 33% in the decade to 2020. This has also seen them manage to achieve ISO50001 Energy Management Certification for its energy management systems. The Council is now tasked, under its Climate Change Action Plan, with reducing its 2009 energy consumption levels by 50% by 2030.

This contract is one of four similar energy performance contracts that Codema, Dublin’s Energy Agency, has facilitated on behalf of the Dublin Local Authorities in the past five years.

“We have experience of successfully working with other local authorities on energy performance and will be implementing a model that has a proven track record which maximises environmental impact while simultaneously generating commercial savings.”

The Deputy Mayor of Fingal, Cllr Daniel Whooley, said: “This project will play an important role in achieving the climate and energy efficiency targets set out in Fingal County Council’s Climate Change Action Plan 2019 -2024. It will act as an exemplar for other public bodies across Ireland, as well as for businesses in Fingal who want to become more sustainable.”

AnnMarie Farrelly, Chief Executive of Fingal County Council, said: “This is a natural next step for us in our efforts to lead the way in terms of Climate Change Action within Fingal. With the help of Codema, we have already met our energy consumption to 2020 and are firmly focused on meeting our 2030 target. The team from Lawler Sustainability has a big role to play in helping us achieve major reductions in energy consumption and CO2 emissions.”

Joe Hayden, Senior Executive Engineer with Codema, said: “The Energy Performance Contract model is very successful and is well-established in countries such as Germany, Austria, and the Czech Republic, so it is great to see it continue to strengthen its foothold in Ireland. Energy Performance Contracts not only provides the Council with the security of guaranteed energy savings, but it also saves on the cost of maintaining these upgrades over the lifetime of the contract.”

As we work towards the goal of net-zero emissions by the year 2050, more and more businesses are realising the importance of energy usage reduction.

The built environment accounts for approximately 25% of global CO2 emissions and if we are to reach our international net-zero target by 2050 building owners have to take action now.

Request a call back

Speak to an
expert

Any cookies that may not be particularly necessary for the website to function and is used specifically to collect user personal data via analytics, ads, other embedded contents are termed as non-necessary cookies. It is mandatory to procure user consent prior to running these cookies on your website.

Analytical cookies are used to understand how visitors interact with the website. These cookies help provide information on metrics the number of visitors, bounce rate, traffic source, etc.

Performance cookies are used to understand and analyze the key performance indexes of the website which helps in delivering a better user experience for the visitors.

Advertisement cookies are used to provide visitors with relevant ads and marketing campaigns. These cookies track visitors across websites and collect information to provide customized ads.